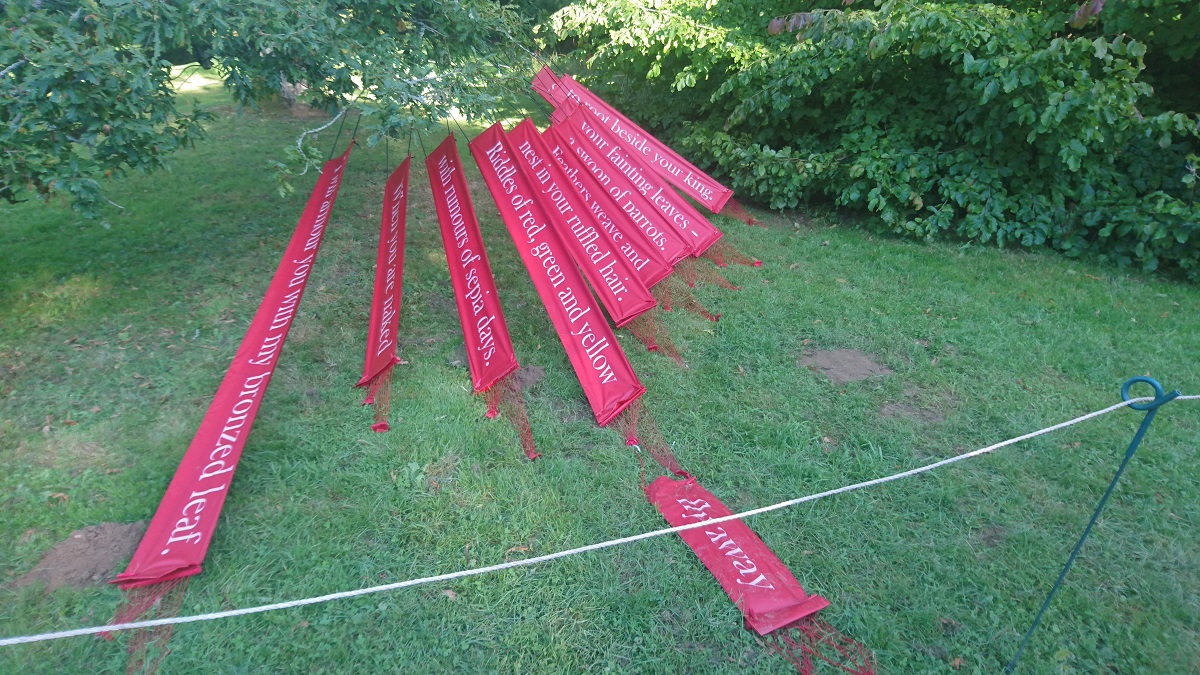 Ode to the Ironwood from the Oak is poem 6 on the Westonbirt Arboretum Autumn Trail 2017.

The audio version of this poem was read by Chris Beale.

Sailed from Persia
to root beside your king.
Parrotia persica:
your fainting leaves –
a swoon of parrots,
feathers weave and
nest in your ruffled hair,
riddles of red, green and yellow
fly away
with rumours of sepia days.
When you are naked
I will armour you with my bronzed leaf.

Next poem: A Seasoned Lover

Marchant's Notes on 'Ode to the Ironwood from the Oak'

This oak is next to a Persian ironwood tree. The ironwood has very dense foliage, the leaves are limp and droop from the branches. In autumn, the leaves turn traffic-light colours that coexist all at the same time. This makes it a very attractive tree. The Oak is known as the King of the forest. I saw the Persian ironwood as an exotic muse for her king, the oak.

I was inspired by the Latin name for the ironwood, ‘Parrotia persica’, named by the German naturalist Fredriech W. Parrot who made the first modern ascent of Mount Ararat in Turkey, where Noah’s ark is believed to have rested after the flood.

The beautiful poem, ‘Ghazal for the Persian Ironwood’ by Ann Gray, shows how the leaves do have a winning, whimsical nature and how the colours have a rainbow-sherbert quality. A ghazal is a form of early Persian poetry. I think I must have stolen the idea of ‘leopard’ bark from her as I used ‘leopard-lichen’ in my first poem.

for the Persian ironwood

You're dressed in pink, a hint of sin to it.
You blush and there's the rush of Spring to it.

Your bark peels pearl, a bluish spice, the sun
the snuff of leopard, snake still cling to it.

Your leaves slip-coated, are swimming with fish,
a splash of wind brings a green swing to it.

Where you are fluted, each grey tangled branch
cleaves to itself to make a twin to it.

You long for the sea, Alborz forests, your
late blaze of red a silent hymn to it.

As Persia says, Ann, when you mouth my name
it has a wild exotic ring to it.

Originally my poem was longer, suiting the form of an ode and included the lines:

“Sailed from Persia
to root beside your king.
A shower of spices,
saffron winds
and hailing turmeric;
orchards of blessings,
that fruit in Autumn.”

However I had to make it shorter to physically fit the tree.

The wood from the ironwood is extremely strong, as is oak. Oak has been used for buildings and furniture, for example Viking long ships and panelling for the House of Commons. The oak is a majestic-looking tree and is a symbol of strength and endurance; this is why I had the oak protecting the ironwood in the poem. The oak is a symbol for many countries and political parties eg, the Conservative Party, the Nazis also had a wreath of oak leaves in the Swastika and it is on the Euro.

The leaves on the oak are retained through winter. I had originally said “I will cloak you in my golden leaf”, but found out this tree has more tannins in its leaves and they turn a bronze colour.

Perhaps this love affair between the king and the ironwood would have ended badly; the ironwood is a host for Sudden Oak Death!

Here are lines from poems that inspired my writing for ‘Ode to the Ironwood from the Oak’:

“A song to the oak, the brave old oak,/ Who hath ruled in the greenwood long” – Henry Fothergill Chorley, The Brave Old Old Oak.

“But look at you:/ shivering in the cold,/ half dressed/ for a party/ that never happened” – Neil Rollinson, Ode to a Magnolia Tree.

“I see the frost-king here and there,/ Claim some brown leaflet for his own,/ Or point in cold derision where/ He soon shall rear the usurper’s throne.” – Lydia Howard Sigourney, Oak in Autumn.

“You have your iron body, Like a knife, a sword… I have my red flowers, Like a heavy sigh… We share cold, storms and thunders” – Rachel Gao, Ode to the Oak.

“Thou ancient oak! Whose myriad leaves are loud/ With sounds of unintelligible speech… With some mysterious gift of tongues endowed” – Henry Wadsworth Longfellow, Eliot’s Oak.

Listen to a bitter leaf to swallow…: Ever experienced that drying feeling in your mouth after a bite of unripe apple? If so, you’ve tasted tannins; a group of chemicals found in many plants, including this common oak (Quercus robur). These bitter chemicals underpin many remarkable relationships between trees.

High tannin levels are the reason why some leaves, such as those of this oak, turn brown in autumn. Scientists believe they deter animals from feeding by increasing leaf toughness and making them less digestible. Even in death, the tannins in oak leaves slow decomposition compared to other leaves. But protective chemicals like tannins take energy to make; so it makes sense for trees to only make them in earnest when they are really needed.

Scientists have discovered that individual oaks increase tannin production when they are attacked. Even more remarkably they found that nearby trees (even unrelated species) also increased their chemical defences – apparently in preparation of an imminent attack. Research shows that many trees release a chemical cocktail into the air when damaged by herbivores – and that other plants can detect and respond to these signals. These airborne messages are also picked up by predatory insects.

Many of us respond to oak tannins; it is the chemical that makes many wines taste dry. It also adds to wine complexity, which is why the most expensive wines are usually aged in oak barrels. Unsurprisingly the best barrels are worth several thousand pounds.